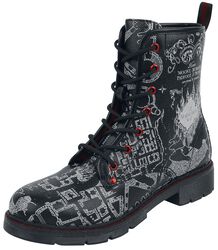 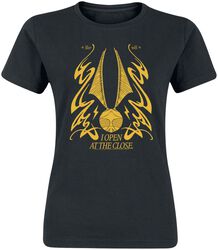 Whoever has read or watched Harry Potter also knows him: the Golden Snitch. Without him, an action-packed Quidditch game would be unimaginable. After all, it is he who must ultimately be caught. The problem: it's damn fast. But whoever catches him can look forward to 150 points and lots of fame and honour.

In our online shop, you'll find several ways to show off the Golden Snitch in your own personal everyday life and away from Hogwarts. Whether in the form of shoes or as a piece of jewellery: anyone who has long wished to receive a letter from the wizarding school should recognise this "accessory" at first glance.

In the Harry Potter universe, Quidditch is certainly the most famous sport of all. The Golden Snitch has silver wings, is otherwise actually golden in design and does not act like an ordinary ball, but rather like a bird. This means: it has absolutely no desire to be caught.

By the way, the fact that Quidditch no longer uses real birds is thanks to the wizards' love of animals at Hogwarts. The snitch, a type of bird, has been placed under magical protection over time.

You don't have to be a wizard, however, to wear the symbol of Quidditch winners in your everyday life. Show your enthusiasm for a very special competition by celebrating the Golden Snitch in all its facets

In our online shop you can buy the Golden Snitch as a necklace, as a bovine and as earrings, but even as a representation on shoes. The classic shape leaves no questions unanswered. And yet this special symbol is always depicted in a new way on the various accessories. Always included: the silver wings that help this "ball" lift itself into the air and have already driven one or two players a little crazy.

Surely you're not just into the Quidditch games when it comes to Harry Potter, but everything else too? Then you should definitely visit our other categories. Among other things, you'll find kitchen accessories, wands and office supplies for Harry, Hermione and Ron.

The Golden Snitch: fast, nimble and an absolute cult

Many fans of the Harry Potter series definitely appreciate the fact that so much attention to detail has also been paid to the Quidditch games in particular. For example, the Golden Snitch remembers the skin that touched it first. Doubtful referee decisions can thus be avoided. And it is exactly this accuracy that awaits you in the articles from our online shop. They have all been designed to accompany you over a long period of time.

The materials used and the workmanship make them great everyday companions that you can of course also wear on special occasions. You definitely don't have to be a Quidditch player to get excited about this magical "creature". The Golden Snitch from our online shop is much more "tangible" than the version from the films.