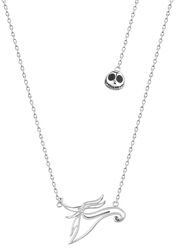 Whether on vhs in the past or in the cinema today, many people cannot escape the magic of Disney. And even if it is rather untypical in real life to sing songs about your current situation at regular intervals, fans love to watch Arielle, Belle and Jack Skellington do it. With the Disney jewellery from the EMP Online Shop, you've found the right companions for a little more "magic" in your everyday life.

Not just for princesses: Disney jewellery

When people think of Walt Disney jewellery, they often think of the famous princess castle, a carriage and a prince riding a horse to his dream girl. But stop! Over the course of time, the world around Disney has become much more diverse and, incidentally, more emancipated. Ever since Rapunzel, the prejudice that a princess has to spend most of her life waiting for a prince has been dispelled. How fitting that there is now also exactly the Disney jewellery with which precisely this kind of modern fairy tale can be lived! Neither too flashy nor too plain, you can bring a little more fairytale feeling into your everyday life.

A look at the wide range of Walt Disney jewellery at EMP shows that the world of fairytales certainly doesn't have to worry about strong heroes and heroines. Because: from Winnie The Pooh to Cruella de Ville to the Cheshire Cat, everything that has rank and name in the Disney universe is represented here. With a lot of love for detail and of course using high-quality materials, completely new stories are told here. Whether you ultimately decide to let Arielle remind you of the time or wear a little Aristocats flair in your hair is up to you.

Disney jewellery: your merch for your favourite films

I'm sure you have "that one favourite film" that you can say in your sleep, don't you? Take a look at our EMP Online Shop and find out if there's any merch to go with it! By the way: Rings, necklaces, watches and other accessories are of course not only suitable for Disney fans in their teens! Even if you already have kids who are at least as enthusiastic about Toy Story and The Lion King as you are, there's nothing to stop you setting the tone with Mickey Mouse and his pals.

Good or evil? Princess or anti-hero?

What would a successful fairy tale be without "the good guys" and "the bad guys"? Maybe you've found yourself rooting for Ariel in her fight to save Eric, but you actually thought Ursula the sea witch was "pretty cool" too. No question about it! Disney's anti-heroes can also be very charming from time to time. Of course, you can also express your enthusiasm for "the dark side of the Force" by choosing accessories featuring Cruella, Scar and Ursula. Maybe they only became so evil in the course of their lives because they had to play second fiddle to princesses and classic heroes?

What types of Disney jewellery are there?

Over the years, we have continuously expanded our range of Disney jewellery in the EMP Shop. Today, when buying Disney jewellery, you can choose between hair accessories, necklaces, rings, bracelets and many other items. The various pieces of jewellery are characterised by a high recognition value and are sometimes based on protagonists, but sometimes also just on familiar patterns that bring a grin to the face of fans. What die-hard "Nightmare before Christmas" lover, for example, wouldn't recognise the classic Tim Burton style from designs? And even in the context of the familiar Minnie dots in white on red, there should be no doubt about who from the Disney universe you can identify with the most.