The history of the black scene

It all began with music. In Germany at the end of the 70s and beginning of the 80s, it was Robert Smith and Siouxsie Sioux, Depeche Mode or Anne Clark, among others, who brought gloom into the realm of sound. Cold sounds, black clothes, dark make-up, smudged lipstick, tousled hair. This was accompanied by partly bizarre lyrics full of melancholy and horror. The supposedly ideal world that had been portrayed on stage and in everyday life was turned upside down. In post-punk and new wave, coldness, minimalism, world-weariness, darkness and threat reigned.


A boon for many young people who found themselves with their feelings in this music at the time. A cold war was raging between the great powers, environmental destruction was a big topic and the news officially spoke of an impending nuclear war. Not all of those who moved to gothic music in dark cellars at that time consciously had an ideology or open rebellion in mind. Many young people simply wanted to be different or imitate their musical idols. For others, the scene was a quiet, sad, black protest. Although the origins of the black scene lay in English post-punk, the subculture only came together in Germany at the beginning of the 1980s. And that was both in the FRG and in the GDR. In the GDR, the so-called ghouls or darks were closely watched by the state security. Nevertheless, Robert Smith of The Cure was a stylistic and musical hero for the black subculture in the workers' and peasants' state, too, and people wanted to imitate his outfit.


Dark outfits were the direct opposite of the colourful fashion of the 80s and thus also an expression of a counterculture that rejected the ubiquitous neon colours. In keeping with the pale faces and dark kohl, there were companies like Bogey`s that advertised gloomy fashions in the youth magazines.


Pumpy trousers, pointy gothic shoes, loose tops for the Wavers, frilly shirts, glitter and silk for the New Romantics, who played with the blurring of genders, emulating artists like Visage or Boy George from Culture Club. Even back then, the subculture consisted of different currents such as the cadaverous goths in flowing black, the cool wavers, the New Romantics in melancholy colour and the EBMers in militant outfits, whose bands took influences from noisy industrial music.


Because you couldn't buy all that in the GDR, people got inventive here. So priests' clothes and especially the black referee shirts had to serve as black outfits after dedicated manual labour.


Inspirations for gothic outfits and styling were taken from gothic literature, among other things. Dark, mysterious, old, oppressive, frightening: these were the characteristics of the so-called Gothic literature of the late 18th century in England. A fitting term, the music press thought, and at some point invented the term Gothic Rock, from which the term Gothic scene was derived. Films, series and comics also shaped the image of the black scene.


The bizarre youths naturally frightened society. They showed people death and evil, turned social norms upside down, broke taboos and provoked people with their appearance. Stories were quickly told about sinister rituals, desecration of graves, Satanism and the occult. The scene did not refute these prejudices, because it wanted to distance itself from normal society and it could not hurt if the "normals" kept their distance out of fear. Besides, many Christian and occult symbols were not only wonderfully mysterious, but perfectly suited to make a statement. Unlike punk or the hippies, however, the black scene did not want political change, but their peace. It was neither politics nor religion that united this scene, but music and the feeling of gloom. The children of the night wanted to be among their own kind, listen to their music and not have to explain themselves.


What many parents still dismissed as a "phase" of their children in the 80s has now grown into a lifestyle. Those who were part of it then are often still part of it today. Each new generation brought with it the musical and visual influences of their time. Today there are numerous gothic festivals, gothic parties and a scene that unites all age groups and very many musical styles. Like all subcultures, the gothic scene struggles with commercialisation and its authenticity. Nevertheless, it still appears reserved and defensive today and focuses on itself.


Dive into the gothic scene! 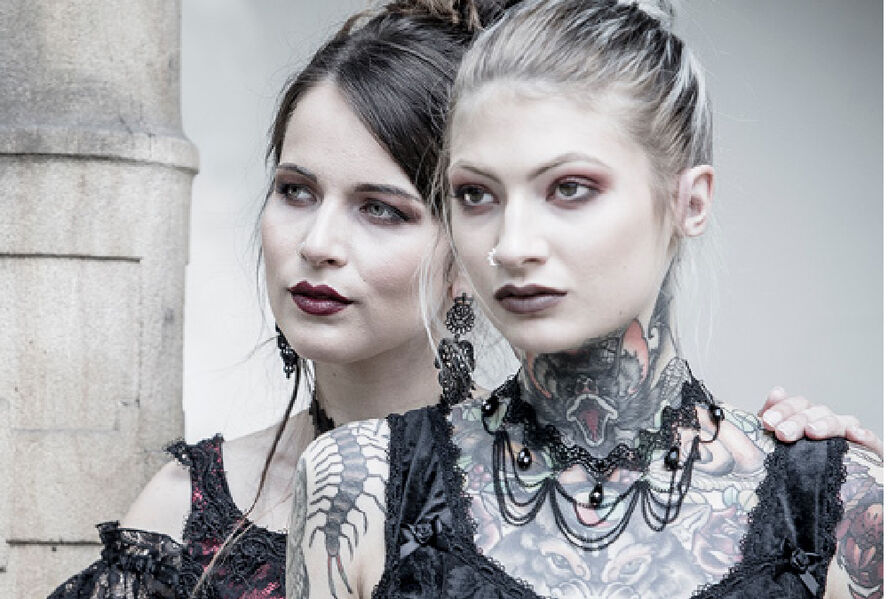 Goths do not laugh.

Goths belong to the S&M scene.