CD More from Bolt Thrower
Sold out!
(1)
More product details
This item is currently not available.

Bolt Thrower needed four long years for the successor of „For Victory“, but waiting was worthwhile. The album „Mercenary“ offers pure Bolt Thrower and deserved having been chosen as Hard Rock album of the month on its release!

by Holger (null) Despite several difficulties with their former record company and differences with ex-shouter Martin van Drunen, Bolt Thrower have a new long player in store! When Martin left the band because of certain discrepancies with other band members, Bolt Thrower was already declared dead but everything turned out to be different. Blunt as they are the guys just asked ex frontman Karl Willets if he didn't want to rejoin the band. He just whistled his agreement and by now "Mercenary" is done. The war machine is rolling again and in 1998 still sounds like Bolt Thrower! They haven't changed a thing, neither sound nor style: still cold as ice, mechanical, slow, monstrous and damn brutal! That's how we love 'em, that's how they are and that's how they always will be. Songs like "Powder burns", "Mercenary", "Sixth chapter" or "No guts - no glory" shred everything to pieces. There couldn't have been anything better than a Bolt Thrower album with ye good ol' Karl, still it's hard to retain some tears since we shouldn't forget that Mr. van Drunen was more than a good substitution for Karl. 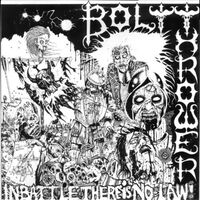 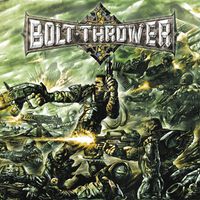