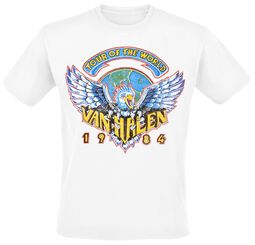 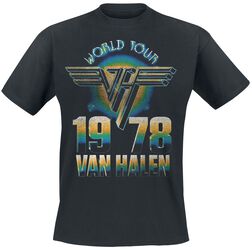 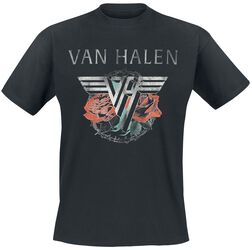 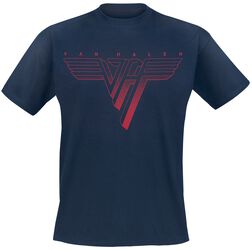 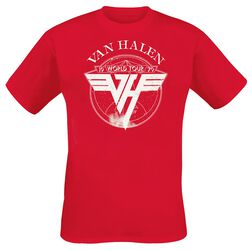 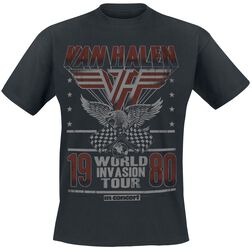 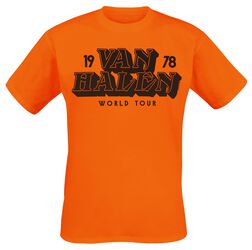 Get ready to Jump for joy (or, you know, something more rock and roll than that) because we’ve got the Van Halen t-shirts your wardrobe’s been missing…


Van Halen are one of the quintessential American heavy metal bands, a band who’re never left off the ‘best of’ lists. Distinguished by the innovative electric guitar stylings of Eddie Van Halen, the band scored plenty of genre-defining anthems, including Jump, Eruption and Hot for Teacher.


Van Halen had plenty of line-up changes throughout their career, but, unsurprisingly, the Van Halen brothers were at the heart. Exposed to music early by their father, a jazz musician, and classically trained, Eddie and Alex Van Halen turned to rock music soon after their family emigrated from the Netherlands to southern California in the 1960s. After experimenting with the new sounds emerging in America at the time, it was ultimately another rock great who helped establish what would become one of the best-selling rock acts of all time (the band has sold an estimated 80 million records worldwide!).


It was Gene Simmons of KISS fame who financed a demo from the Van Halen which led to their critically acclaimed debut album, Van Halen in 1978. This album went on to sell more than 10 million copies in the United States alone and featured hits that would become bonafide classics like Panama.


Introducing Van Halen t shirts into your wardrobe will automatically signal the kind of person you are. Into your music. Loves a classic throwback. Occasionally does air guitar in your room. All traits and qualities that tell the world ‘this person is one of the good ones.’


The choice of Van Halen t shirts and tops from EMP include designs inspired by the band’s iconic logo, instantly recognisable to any heavy metal fan. Other t-shirts take inspiration from the classic tours of Van Halen, like the 1980 World Invasion tour. You might not be able to turn back time (not a Van Halen song, but Cher is still rock so we’ll allow it) but the next best thing after actually going to the concert is getting to look like you did. Put on one of these replica Van Halen tour t-shirts, crank up your favourite Van Halen album and have your own concert.


When you check out our collection of Van Halen t-shirts, you’ll want to say to EMP: ‘Hey, You Really Got Me.’ And we do. We got how you want to dress and how you want to style yourself to the outside world. So, get your new tee, pair it with some kick ass jeans or a jacket and go and Dance the Night Away!