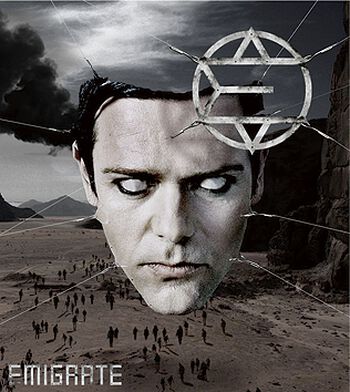 On his solo debut with Emigrate Rammstein-guitarist Richard Z. kruspe present himself of different sides. A modern, metallic and dark album which eldritchly holds a lot of fire and energy!
CD 1
1. Emigrate 2. Wake up 3. My world 4. Let me break 5. In my tears 6. Babe 7. New York City 8. Resolution 9. Temptation 10. This is what 11. You can't get enough

by Markus Wosgien (04.07.2007) Travelling man: Rammstein-guitarist, Richard Z. Kruspe, who found his new home in New York, used all his experiences with the new culture, the people, and his new surrounding for his first solo album. It's a fresh, modern and pleasantly dark album with a very positive attitude. The parallels to Rammstein can't be denied by Kruspe but it is thrilling to see how his unmistakable riffs sound and work in a completely different sound. The album begins with three great, heavy neck killers. In times, he even dares into Psychedelic as well Gothic Rock regions. The range is wide. Elektronics, Industrial and Punk play an equally important role as does modern Metal and Rock. Besides the guitar parts, the songwriter also stands behind the microphone and delivers an excellent performance. He lives the songs and brings them to life. The result is a collection of eleven great Rock songs!