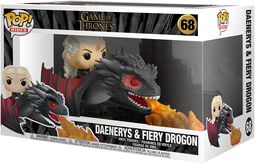 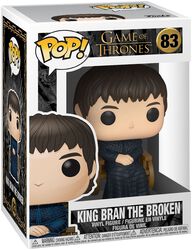 Whether you grew up deep in the north behind the thick walls of Winterfell, call the vast Dothraki grasslands your home, or come from the house Martell amid the sand dunes - the Game of Thrones figures from the EMP Online Shop will not only stand by the side of the heir to the Seven Kingdoms, but with anyone who strives to conquer the Iron Throne So snap up the figures from the most successful fantasy series of all time and take what belongs to you, with fire and blood! Errr, in the metaphorical sense, of course.


"This goes beyond loyalty. This is about survival" - and only those who have their closest companions and best warriors around them can survive the long night! But wait, while Jon Snow unites the remaining armies of the Seven Kingdoms against the army of the dead, are you standing alone? If so, then it's time to put together your very own troop to fight against the Night King. With the Game of Thrones figures you can line up the best of the best shoulder to shoulder and choose from all your favourites. Will you choose the Mountain with his muscle power and thick armour? Or do you think making an arrangement for some clever tactics with Varys is the best strategy? Can't decide? And what about Tyrion? Because even if the burning swords of the Red Lady fail, a well-filled tankard of Dornish wine tastes just great even in minus temperatures!


Funko Pop! figures under the wolf and dragon banners


Black button eyes are characteristic of the famous Funko Pop! figures, but GoT figures just wouldn't be GoT figures if the white walkers didn't have their blue eyes! And that's just one of the many special features of the Game of Thrones characters, as in addition to limited editionsand multi-packs, you can find all the Funkos in their famous window boxes, ready to collect and display. In addition, the mini characters from the series are really cool and are perfect companions for bloody weddings, a mutiny at the Wall and all the other unexpected scenarios which George R. R. Martin creates for us!


Game of Thrones thrives on its elaborate intrigues, power games, and lots of intellectual conversations - but what would GoT be without massive battles and a hefty dose of action? For this reason, in the EMP Shop you can find a wide selection of action figures such as Jaime Lannister, Ned Stark and Brienne of Tarth. Time to rewrite the stories of the great legends of Blackwater, Kingslayer and Oathkeepers in your own way. With the matching Game of Thrones action figures, even dragon fire cannot stop you - at least that's what the packaging says...