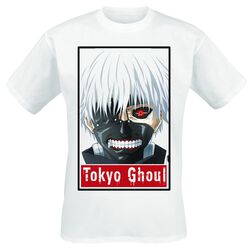 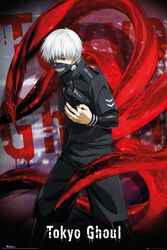 It's only fresh human blood that can slake the thirst of a true Ghoul. So it's better that you stay away from those creatures and instead get Ken Kaneki's look - before he was bitten! And no worries, in case you missed your chance, dark shirts and black trousers look fantastic in contrast with long nails and white hair. So come on in and click through the EMP Online Shop and kit yourself out with merch from the Ghouls and their mysterious stories...


Your Ghoul, your look, your world


Ghouls may look similar to humans in their outward appearance, but their personal food preferences would be hard for some people to stomach - nevertheless, Ghouls only really feel comfortable when they can move around their environment safely and unseen. Whether Ghoul, Half-Ghoul or human, with the posters from the anime series you too can decorate your apartment in the look of the bloodsucking creatures and decorate your walls with fresh entrails... errr, we mean cool posters from Tokyo Ghoul!


Many well-known animes have become so popular that a live-action film was also made - and that's also the case with Tokyo Ghoul. In the EMP Online Shop you can find merch from the film and series, and relive Ken's adventures over and over again. And if that's not enough for you, maybe you'll like the numerous Funko Pops! and action figures from Eto and Uta. As Ken said: 'there are ghouls who only see humans as targets to be preyed upon — and on the other hand, there are humans who have decided that ghouls are only inhuman monsters. But I don't think either of those are correct. Instead of mutually tramping on each others' existence we should just respect each other a little more." So put together your own team of vinyl heroes and enforce your own form of justice on the dark streets of Tokyo. And in case that all becomes a little too hectic for you, there's always time for a refreshing drink in Anteiku.


Although Ken initially considers his new skills and desires to be new and downright horrible, at some point he starts to come to terms with them. But why only carry things with you that you can't get rid of? Better to only take what you really like! For example, how about a bag, rucksack or practical wallet from the series? Or would you prefer to create your whole wardrobe in the look of the anime? Whether you're looking for clothing, accessories, jewellery or other merch, here you can find everything from Tokyo Ghoul and its unique characters.