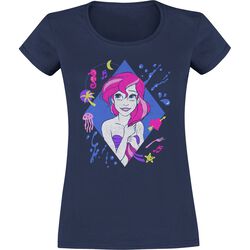 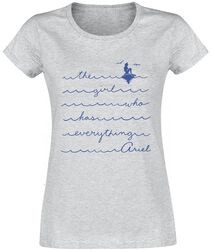 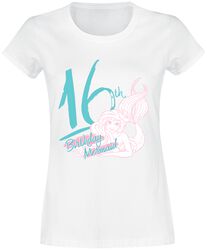 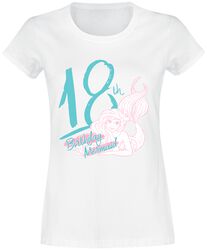 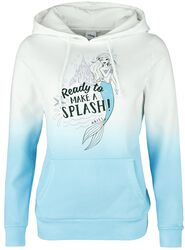 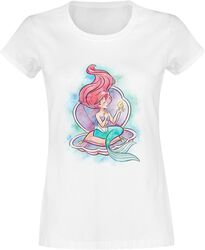 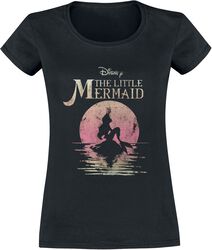 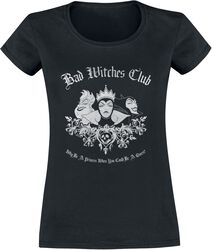 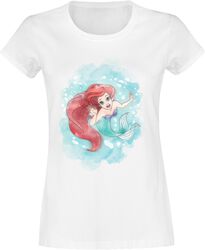 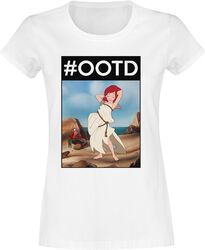 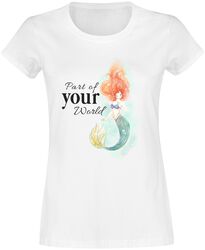 A romantic, heart warming love story, funny characters and beautiful songs like ‘Under the Sea’ made The Little Mermaid one of the most loved films to come out of the Walt Disney studios. Released in 1989, it was the 28th full-length Disney animated feature film. The second part was released in 2000 with the title ‘Return to the Sea’ and in September 2008 the third part ‘Ariel’s Beginning’ was released. At the EMP The Little Mermaid online shop, you’ll find a whole range of fan merch.


Are you a fan of exciting Disney adventures? Then take a look at our Lion King fan shop as well. Still after more? Then we also have an array of fan merch from Aladdin and Frozen.


The Little Mermaid – Here and now, I wish to be human!


Triton, the ruler of the merfolk has a daughter – the beautiful Ariel. But she is unhappy as a mermaid. She’d much rather be human, with her own legs to stand on, to dance and to walk. This makes Triton very angry as in his eyes, humans are barbaric fishermen who are a threat to the merfolk. One day, Ariel notices a firework in honour of Prince Eric who is celebrating his birthday onboard a ship. When a storm suddenly brews, the ship capsizes, and Eric starts to drown. The mermaid rescues him and instantly falls in love with the handsome Prince. As he begins to wake from his powerless state, Ariel swims back into the ocean and he can only remember her blurred face and her beautiful song.


When Triton finds out about what happened, he is beside himself with anger and destroys Ariel’s secret hideout, where she has been treasuring various keepsakes from the human world. The sea witch Ursula witnesses this and uses this opportunity to seize power over the merfolk. She gives the little mermaid three days to transform into a human. If she manages to get a romantic kiss from Eric then she can remain a human. She agrees and in return gives Ursula her voice, the only thing the Prince recognises her by.


However, shortly before the two get to kiss, Ursula intervenes and transforms herself into a beautiful human being. Through Ariel’s voice, she woos Eric who mistakes her for his rescuer. He takes her hand and everything now seems to be lost for the little mermaid. But with the help of the underwater creatures, which Ursula cannot stand, the marriage is stopped, and her cover is blown. Eric realises his mistake and he wants to make sure he kisses the right girl, but it’s too late. The sun is already setting and she is turning back into a mermaid and evil Ursula still has the power. To save his daughter, Triton asks Ursula to transform back into her witch form in return for giving her the crown. Eric then appears and does everything to get his true love back.


Ursula accidently kills her two beloved eels because of Ariel. This enrages Ursula and she transforms herself into an octopus and spins Prince Eric’s ship into a whirlpool, but in the end, Eric rams the bow of the ship right through Ursula’s heart. The end of the Disney film seems to have more in common with Bruce Willis’ Die Hard films than something from Hans Christian Andersen. The head of Disney Studios, Jeffrey Katzenberg, isn’t a fan of boring endings so he tried something much more powerful.


Although Disney’s masterpiece has been around since 1989, shortly before Aladdin appeared on the big screen, the feature film is more loved than ever before, just like all the Ariel fan merch. The story is based on the fairy tale ‘The Little Mermaid’ by Hans Christian Andersen. The classic was released as a special edition on DVD in 2006 and the music, especially the song ‘Under the Sea’ won a Grammy, two Golden Globes and two Oscars.


The Little Mermaid, just like Snow White, is today one of the best known Disney characters. She is especially recognisable by both children and adults alike by her red flowing hair and her enchanting blue eyes. Those who cannot get enough of this will love the Ariel fan merch. At the EMP online shop you can find amazing clothes for true fans of Ariel, Ursula, Eric, Sebastian, Flounder and Co.


The Little Mermaid jewellery such as necklaces, earrings, bracelets and hair clips are absolute must-haves for every fan. There are also practical purses with an Ariel motif and of course there’s the collector’s figurine! And for those who want a breath of sea air are highly recommended to try out Ariel’s cosmetics!