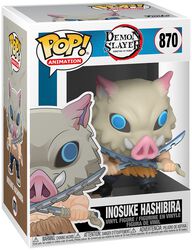 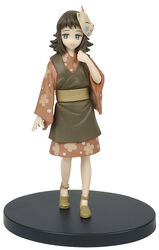 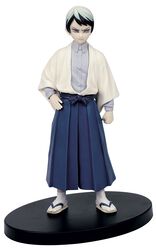 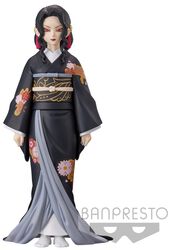 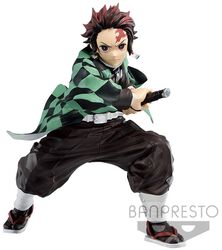 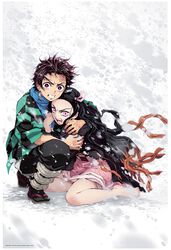 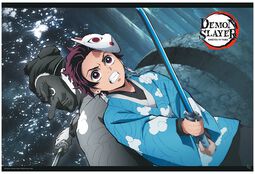 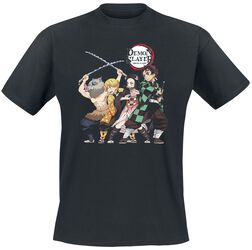 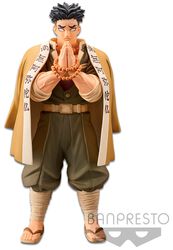 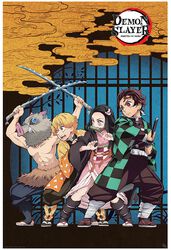 Demon Slayer tells the story of Tanjiro Kamado. A boy who lost almost his entire family and becomes a demon hunter. On his journey to find a cure for his little sister Nezuko, who has been turned into a demon, he is accompanied by Zenitsu Agatsuma and Inosuke Hashibira. Both characters with unique personalities. Zenitsu who adores beautiful girls but is otherwise a coward and a crybaby, and Inosuke who always wears a wild boar mask, grew up in the forest and constantly wants to prove his strength. But the two are not Tanjiro's only companions, his little sister Nezuko also accompanies him. Together, the four form an incomparable quartet, with the same goal of destroying the demons.

Muzan Kibutsuji, the first and supreme of all demons and leader of the 12 Demon Moons, is Tanjiro's real target. He wants revenge on him because Muzan killed his family and turned Nezuko into a demon. However, Tanjiro has to start at the bottom if he wants to stand any chance against Muzan Kibutsuji. The demons have a skin like stone and can only be defeated by cutting off their heads. The older and the higher the rank of a demon, the harder its skin. For this reason, Tanjiro has to train hard to defeat the demons. He is helped in this by Sakonji Urokodaki, an instructor who teaches Tanjiro one of the various breathing techniques. The man wears a tengu mask and was himself a successful demon hunter in earlier years.


Opposing the demons are the demon hunters. They are divided into 10 different classes. At the top are the Hashira, the 9 pillars. They serve the leader of the demon hunters. He wants to free the earth from the man-eating demons and restore peace. To achieve this goal, the Hashira must defeat the demon moons and also Muzan Kibutsuji. But this is not easy, for how can one face an enemy who can change his shape?


But which side are you on? Do you also practice your fully concentrated breathing every day, like Tanjiro? Are you preparing for your exam to become a demon hunter, or is your goal perhaps even to become one of the new pillars like Giyu Tomioka? No? Then you would probably rather become a demon, learn bloody demon arts and maybe even become one of the dreaded demon moons yourself.


No matter which side you're on, you can't deny that the series is an absolute blast. So is their merchandise. Get the Demon Slayer figures from our shop and add to your collection!