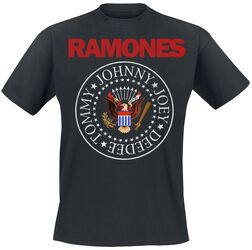 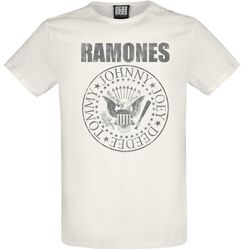 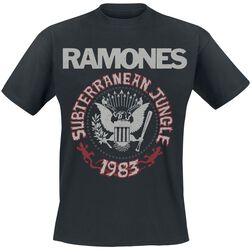 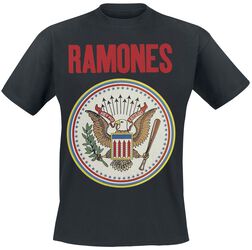 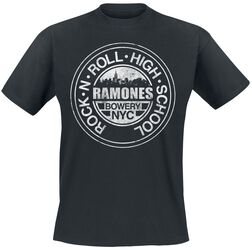 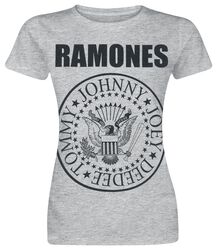 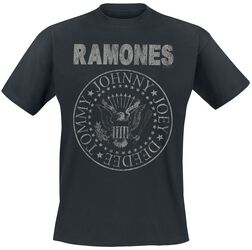 The Ramones have arguably been one of the most influential bands in history. By making their own music in the mid-1970s, in contrast to the rock music of Pink Floyd and Led Zeppelin at the time, they created a new genre of music: punk.


The Ramones' music was characterised by simple harmonies and structures, but played extremely loud and fast. The lyrics were superficially rather simple, reminiscent of nursery rhymes. But the Ramones thematically addressed the problems of the 1970s.


The Ramones are cult. The band's logo consists of the American eagle - also used on the seal of the President of the United States - and the names of the four Ramones: Johnny, Joey, DeeDee and Tommy. Many of the Ramones T-shirts you can buy from us feature the legendary band logo, some in modified versions.


The band's most famous song line is probably "Hey ho, let's go". And if you've just sung it in your head with the right rhythm, you're a true Ramones fan. Then you should definitely browse our Ramones T-Shirt Shop and buy your new favourite shirt. The T-shirts are at least as iconic as the music of the four boys.


Whether black, white or grey. No matter if band logo in black and white or in colour. Or even if you want to have the most famous song line on your back. We have the right Ramones T-shirt for everyone. But keep your eyes open: There are some pieces that you will only find exclusively here at EMP Online Shop and nowhere else. As a true fan, you shouldn't miss out on them. Did you know that the Ramones sold more T-shirts than albums?


Not had enough of the Ramones yet? We've got more!


In our online shop you will not only find Ramones T-shirts. Take a look at our Ramones accessories. Maybe you're still missing a Ramones patch on your frock. Or you can buy one of the Ramones albums we have on offer in addition to the T-shirt. That way you can rock along in style at home.